Take the Chardham pilgrimage tour and visit the four main sites in Uttarakhand-Badrinath, Kedarnath, Gangotri, and Yamunotri in the lap of the Himalayas. Devotees from around the globe making it one of the most visited shrines. You can also visit various shrines and catch on camera the mesmerizing view of the Himalayas. The packages provide a comfortable stay, in addition to the popular appeals, so you don’t feel short of anything during the trip. The excursion with us will certainly make you feel relaxed from within with divine harmony and natural peace. Taking the Haridwar Chardham Yatra has never been an issue and costly either, with our cheap and best Chardham Yatra Package from Haridwar. This affordable Haridwar Chardham Yatra Package makes your full visit to Yamunotri, Gangotri, Kedarnath, and Badrinath, enjoying the entire Chardham Yatra in your budget. As well as experiencing the natural beauty of places like Mussoorie “The City of Beautiful Lakes” and Barkot, you can feel the true spirituality and a fresh soul in you by Bathing in various Kundas and rivers, such as Tapt Kund, Ganga and Yamuna, and offering prayers to the Lord in some magnificent temples, such as the Temple of Gangotri, Yamunotri Temple, Vishwanath temple, and Badrinath temple. This Chardham Yatra Haridwar Package of “9 Nights and 10 Days” helps you to enjoy the most unforgettable travel experience with the best facilities like accommodation, meals, transportation, and so on. 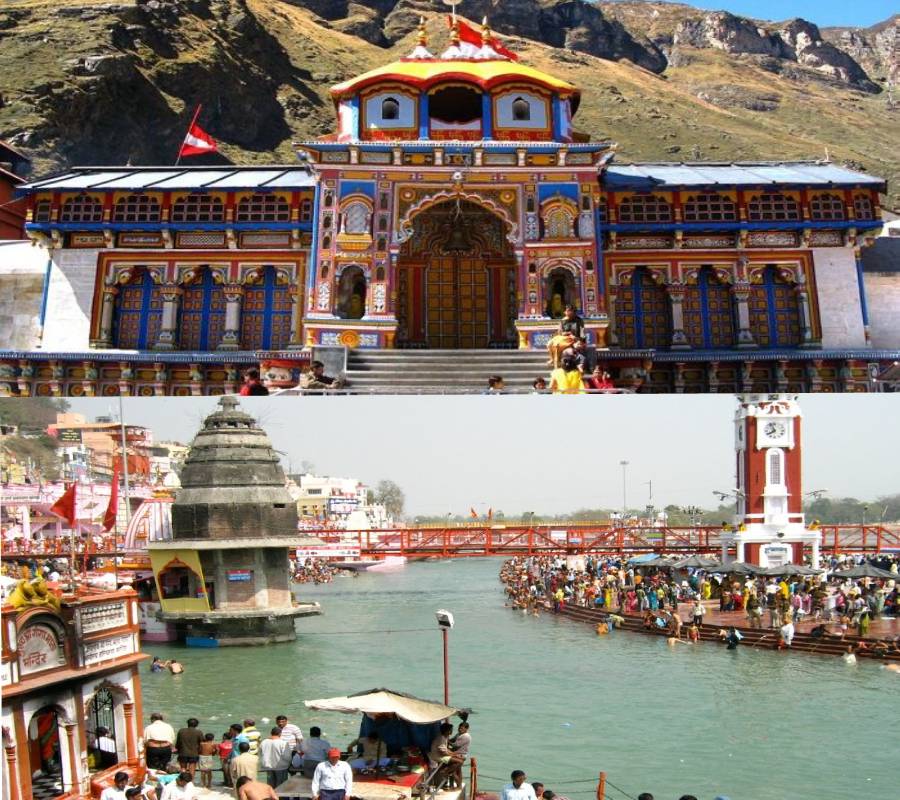 Early morning after breakfast (packed breakfast), drive to Jankichatti / Phoolchatti & star trek from here to Yamunotri (6kms) (Either by walk or by horse or by Doli at own cost). Upon taking a bath in the warm water of Jamunabai Kund and getting “Yamunaji” darshan return by trek to Jankichatti. Later drive towards Barkot, Overnight stay at Barkot.Yamunotri Temple: The 19th century temple was built by Maharani Gularia of Jaipur. In the present century, it was demolished twice and rebuilt again. One can cook rice at Yamunotri by packing it in a cloth and dipping it in the Tapt kund’s hot water. Pilgrims take this cooked rice home as “Prasad”. You can give Divya Shila here near the temple “Pooja.”
Surya Kund: Surya Kund: Near the temple there are a variety of hot springs that stream into many pools. The most important of these is Surya Kund.
Yamunotri weather – The maximum temperature is 18 degrees in summer and 10 degrees celsius is the minimum. The days are cool but the nights are cold.

Morning after breakfast, drive to Uttarkashi. Check into the hotel arrival in Uttarkashi. Visit Kashi Vishwanath Temple in Uttarkashi. Overnight stay at Uttarkashi.There are a number of ashrams, temples in Uttarkashi.. The town’s name reflects its similarity to Kashi (Varanasi) city and its location (as north). The town of Uttarkashi is also situated on the banks of the Ganga River, close to Varanasi.Vishwanath temple The Vishwanath temple is one of Northern India’s oldest Shiva temples. Rebuilt in the ancient architectural style by Maharani Khaneti Devi of Tehri State in 1857. It is located in the heart of the city. Since time immemorial in the temple complex a huge iron trident, symbolic of the divine mother’s, is raised and worshiped. Even part of the temple complex are Ganeshji, Sakshi Gopal, Markandeya Rishi’s small shrines. Only Akhand Jyoti and Akhand Abhishek are given special morning and evening aarti. Uttarkashi is known as ‘ Saumya Varanasi, ‘ Lord Shiva’s abode in Kaliyug, as per Skunda Puran, and counted as one of the twelve Jyotirlingas.Shakti temple – Shakti temple is right in front of the Vishwanath temple. It has a wide ‘ Trishul ‘ about 6 meters high and 90 cm circumference. Although there are different views on how this is made, the upper part of it seems to be made of iron and the lower part is made of copper.. As per the epics, the Goddess Durga(Shakti) has thrown this Shakti on the devils so it gets its name. Since then this Shakti is erected over here.Uttarkashi Climate – Usually warm in summer, temperatures range from 30-35 degrees Celsius but nice nights, cold in winter

Early morning drive to Gangotri (packed breakfast), enroute to Gangnani take a holy dip in Garam Kund, more drive to Gangotri through beautiful Harsil Valley. Harsil is known for the beauty of nature and the magnificent views of the Deodar trees and mountains. Upon arrival at Shree Gangotri, take a holy dip in the sacred Ganges river, which at its source is also called Bhagirathi. Perform Pooja and Darshan, then relax in the beautiful surroundings for some time. Later drive back to Uttarkashi. Overnight stay at Uttarkashi.
Gangotri Temple: Designed in the 18th century by Gorkha General Amar Singh Thapa, the temple is located on Bhagirathi’s right bank.Gangotri Weather – Gangotri Climate – During the summer, the maximum temperature will reach 20 ° Celsius. At a minimum temperature of 10 ° Celsius, summer nights can get colder. Light woolen clothes are required during summer visits to Gangotri. Winter season is very chilly in Gangotri. During the winter, Gangotri will be coated in snow sheets. Due to heavy snowfall, pilgrim centers remain closed throughout the winter.

After breakfast drive via Moolgarh & Lambgoan to Guptkashi. You can see the beautiful Mandakini river in Tilwara on the way. The river Mandakini comes from Kedarnath, travel along the river to Guptakashi, visit Guptakashi’s Ardh Narishwar Temple. Check into the hotel arrival in Guptakashi. Overnight stay at Guptakashi.
Guptakashi :- The name Gupt Kashi means “Hidden Benares. Mythology explains how Shivji first concealed himself at Guptkashi when the Pandava brothers were looking for a glimpse of Shiva, but later fled from them into the valley To Kedarnath, where the Pandavas finally fulfilled their wishes. There are more concrete links as well-Kedarnath pandas (priests) stay in Guptkashi during the winter months and after the Kedarnath temple is closed for the winter, the image of the Kedarnath temple. On his way to Ukhimath (through the valley), Kedarnath passes through Gupt Kashi, where he stays for the winter.
Guptkashi Climate – the temperature ranges from 25-30 degrees Celsius in summer, nice.

Morning after breakfast departure for Kedarnath dham. Enjoy Kedarnath Darshan. Overnight stay at Kedarnath.
By Helicopter: Our operator will pass your Helipad Prebook to you in the morning. Whether it’s by helicopter or by trek, you should tell driver about your arrival time, and Driver will be there to pick you up.
By Trek: Our driver will drop you at Sonprayag in the morning and you’ll have to take your local jeep to Gaurikund and then your kedarnath ji trek. You adopt the same route and return to Sonpraag after darshan. There is a major parking problem, so if his touch no, the driver can return to another palace You have to find other taxis or wait for your driver if you don’t work.
Kedarnath: Kedarnath: The Kedarnath temple, one of Lord Shiva’s 12 jyotirlingas, is a scenic spot in front of the majestic Kedarnath range is a scenic spot situated, against the backdrop of the majestic Kedarnath range. Kedar is another name of Lord Shiva. According to legend, after defeating the Kaurava in the Kurukshetra battle, the Pandavas felt guilty of killing their own brothers and sought the Lord’s blessings Shiva for redemption. He repeatedly eluded them, and as he fled, he took refuge in the form of a bull at Kedarnath. He dived into the ground after being pursued, leaving his hump on the surface.
Kedarnath Weather– Kedarnath’s weather stays cold for most of the year due to its high altitude. Summer here, though winter is extreme, is cool and pleasant. During summer season the temperature varies around 20°Celsius. Light woolen wear is recommended. Winter season in Kedarnath’s winter season is extreme with mercury falling to 0 ° Celsius. During this time the place experiences snowfall as well. This time is usually avoided by visitors due to the extreme climatic conditions.

Morning after darshan, back to Guptkashi, by Track or helicopter. Overnight stay at hotel.

Morning after breakfast, drive to Badrinath. Check in to the hotel arrival in Badrinath. Pilgrims have the Darshan of Badrivishal & Aarti at evening after having a bath in the Taptkund. For Pinddan Shraddh of ancestors (Pitrus), Brahamakapal is significant. Many popular sightseeing spots such as Mana, Vyas Gufa, Maatamoorti, Charanpaduka, Bhimkund and the Saraswati River “Mukh” are available. Just within the three kms of Badrinathjee. Overnight stay at Badrinath.
Mana Village : It is the last Indian village before Tibet, populated by an Indo-Mongolian tribe. it is the last Indian village before Tibet.
Vasundhara : Vasundhara is a majestic waterfall, as the name suggests. This place is 5 kms. from Badrinath out of which 2 kms. is motorable upto Mana.
Bhim Pul : A massive rock forming a natural bridge lies across the raging Saraswati river on the other side of the village of Mana. It provides a stunning view of the water that thundered through the narrow passage under the rock and is believed to have been put there by Bhim, the second eldest among the five Pandava brothers.
Vyas Gufa (cave): This is a rock-cave near Mana Village where it is believed that Ved Vyas had written the Mahabharata and the pauranic remarks..
Badrinath Weather: Badrinath Weather: The maximum average temperature is around 18 ° Celsius and the minimum average is 8 ° Celsius. Hence, warm and woolen clothes are required for a year-round stay in Badrinath. Snow falls also follow winter in Badrinath. With an average temperature of 5 ° Celsius, winter is very cold. This time is usually closed to visitors due to the extreme climatic conditions.

Rishikesh’s ‘ location of the sages ‘ is a well-known religious town on the bank of Ganga, surrounded on three sides by the Himalayan Shivalik range It is said that when Raibhya Rishi made extreme penances, God appeared under the name of “Hrishikesh” and this region became known as Rishikesh.Drop at railway station /hotel. 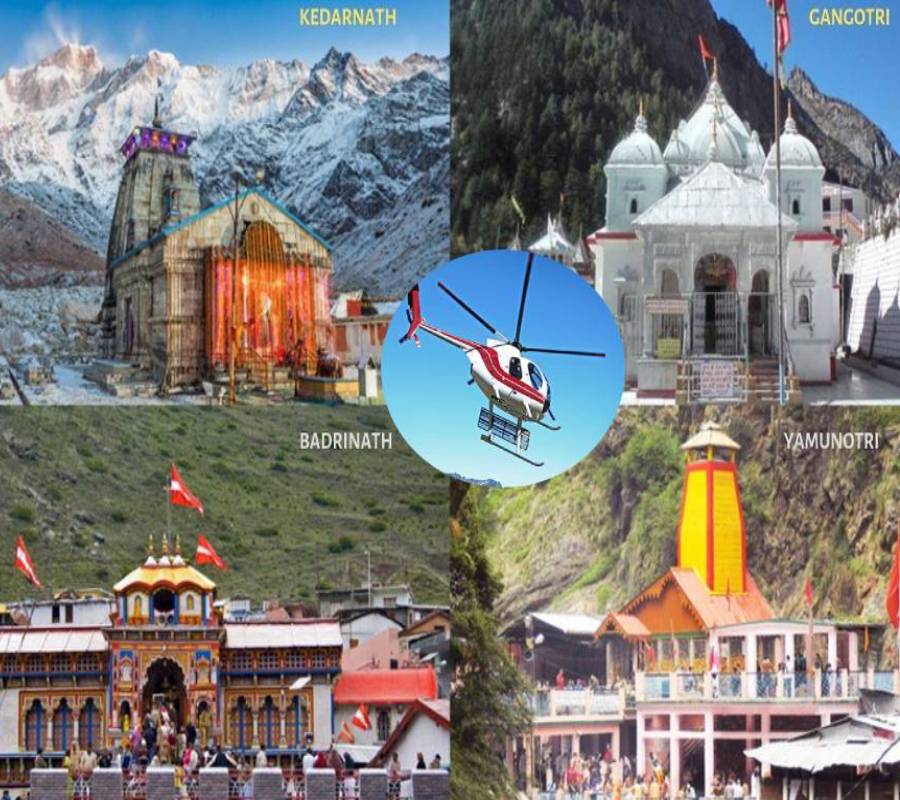